Do you Practice Muay Thai or Kickboxing | Mississauga Elite

So i wake up another lovely morning in the great city of Mississauga, do a couple quick mobility exercises and pop on my computer to check email when i run across a really good video.

While there has been quite a shuffle with the glory kickboxing events now held on spike TV, but im sure the hardcore muay thai and kickboxing fans remember him ko’ing legendary Giorgio Petrosian in their glory 12  super fight.

if you don’t take a look at the documentary here.

Kickboxing as a sport is quite a bit different than the martial art of  muay thai. Anytime guys punch and kick with gloves on it falls under the umbrela of “kickboxing”.

When there are in-fact many systems  in the style ranging from the american more karate influenced styles to the dutch Muay Thai and Karate mixed styles.

I am not going to open the can worms as to which style is best but  just wanted to highlight the big difference between Muay Thai done in Thailand and the kickboxing practiced elsewhere. 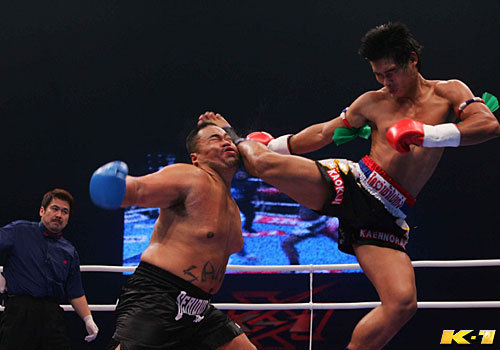 The long and short of it is style preference aside its probably best you practice according to the rule set you will be competing under.

I advice students to practice everything punches kicks knee’s elbows clinch foot work , head movement. Learn it all and focus your energies towards whatever event or phase of training you are focusing on  when you need to

For illustrative purposes ive attached some video of Samart Payakroon, A retired fighter who I would have to say is one of the most complete strikers in the competitive arena ever to compete in muay thai & kickboxing.

A true master of all the tools.