Mississauga BJJ | Enter the Game of Half Guard 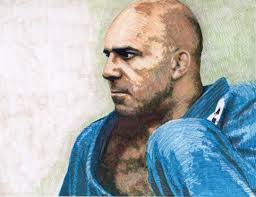 Gracie Barra BJJ black belt Roberto Gordo took a position “half guard” that was far from optimal and re-invented it to become a staple of many championship level BJJ competitors toolboxes.

Personally it isn’t always my preferred option but that is the beauty of  BJJ , the art is expressed differently by everyone that practices it.

Even Gordo first only took up working the position heavily when forced to by suffering a knee injury.  By playing half guard in BJJ you have the advantage of removing the need for  flexibility and leg mobility common to making many other guards so effective.

done right you are usually very close to sweeping the opponent or at the very least doing a good job of keeping then constantly off balance and in a defensive posture. Sounds pretty much like the description of martial arts & BJJ to me .. “using a weaker position to off balance and displace a stronger opponent“

Today there are many new variations of the position and I generally teach it as a way bakc the feet for MMA / BJJ applications or a butterfly & full guard recovery tool.

Either way ask our in house half guard advocate Jeff Tipay  and i’m sure he will demonstrate there are a lot of sneaky little tricks if you look to develop the half guard and make it a staple position in for your overall Brazilian Jiu-jitsu game.

Even if you don’t look to base your grappling on being in half guard it is one of the important transitional positions that determine if you win ore loose a exchange of position. Like almost anything else in BJJ , learning it is the best way to avoid and defend it so get studying your half guard before you stuck in the spiders web that is a half guard specialists game.