Ok right off the top let me begin with this “cover my ass disclaimer :)”..

I totally respect the greatness, creativity and clean technique that Anderson  silva brings to the octagon. He is a great champion both in and outside of the cage,  But unless lightning strikes at UFC 162 in my 15+ year fight fanatic opinion Chirs Weidman is going to defeat him and take the belt.

Ofcourse not everyone agrees 🙂

Here is what the fans are saying

“Gsp is the only one who can beat silva”

“I heard Anderson silva once shot the wings off a butterfly!!!”

in my opionion most of this is untrue.. but the only thing that matters now is that weidman fight.  We can check on the whole “butterfly” thing antother time.

hopefully by now it is obvious that anyone can get “got” in the cage and Anderson is no exception. While it is true he hasn’t lost recently, when you break things down to a micro level and look at the small wars taking place in the fight I cant help but feel come july 6th 2013 we will be looking at a new middleweight champion.

The facts many FANS want to deny

I welcome ANYONE to counter what i’m saying with anything other than “i hope he wins” cause honestly i love Silva as the champ he carries the belt well and a win here opens the door to talk of some megas fights vs Gsp anf more likely Jon Jones.

Going way back to the days of vale tudo “If you are new to this dont know what that means take a second google it”  or click this link below for a vale tudo fight where the grappler  couldnt dominate the range and lost big time.

MMA is not much different that any struggle / war and in war it has long since been established, who ever controls the range of the fight and where it takes place has a best chance of winning if all else is remotely equal.

Anderson is a great long distance fighter with decent takedown defense vs the average level clincher but vs an experinced, hungry and versatile grappler like weidman I dont see how he will be able to maintain either of his two preffered striking ranges (long distance or the thai style head clinch/plum which i must add is a gift wrapped takedown for a any upper body takedown specialist).

Look at silva vs sonnen?? very basic bullrush takedowns to dominate top position after closing the distance while covered up with some rudimentary striking. Only thing is once of the mat sonnen isnt a finisher via Submission or strikes and grinder who generally gets caught if given enough time to mess up


The big difference between Sonnen and Weidman skill wise outside of pre-fight hype talk Weidman has Serious skills on the mat in terms of scrambling ,maintaining positions and if my gut instinct is correct he is very submission savy. Training with the likes of matt serra , renzo graice and John danather to develop his submission skills plus his previous wrestling skills is going to be the problem  for silva.

Without that ability to stop the takedown, tie Weidman up or creat any scrambles to return to his feet Anderson is stuck on the bottom of a superior grappler which is never a good thing for anyone.

Please take a look at weidmans flow from standing to ground in this match vs also very bad ass wrestler James brasco in the adcc trials a few years back.. you dont see this level of timing and skill transitioning very often. Far from the basic mma wrestling takedowns we are accustomed to seeing now of double single and high crotch this guy brings a problem basic takedown defence wont be able to solve.

Anything can happen in a fight but even the most loyal anderson fanatics should admit the odds of this match hitting the floor are very high.

Now i know a little something about fighting on the ground and while anderson is good there its also very obvious  he wisely preffers to avoid it vs submission specialists but in this fight its likely he wont have the choice.

In the case of sonnen there was no submisson danger but with Weidman I dont see how he will be able to prevent getting most likely submitted or at the very least totally positionally dominated.

Yes I know Grappling isnt fighting ,but still.. Weidman has twice faced the cream of the crop at his weight class with little issue. 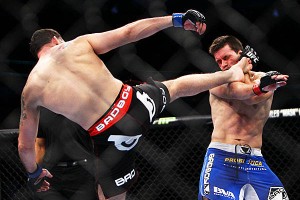 Beating Demain Maia on a few days notice in the UFC under full mma rules &  bringing the fight in a big way to Andre Galvao in ADCC.. “both gentleman are multiple time BJJ champions and high level sumissions artists heads and tails above any of the crafty defensive tactics Silva applies”

Ultimately while they can both do everything in the cage this boils down to a modern day Striker vs. Grappler matchup and without the ability to maintain the distance, control the clinch, submit off the the ground or create a scramble to get back to his feet , Anderson Silva is going down this time.