Idug around and found this great article on the REAL salt youll probably want to look at having.. 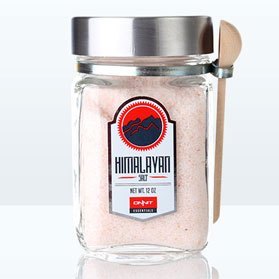 Prepared by: DeAna Tulett
Himalayan Salt, known to the Himalayans as White Gold, is mined from a dried up Himalayan sea that existed 250 million years ago.  It is a pure and high quality salt that contains 84 trace minerals that are required for our bodies to function properly and sustain human life.

Many people are jaded by the word “salt” and you’re probably wondering how something that has been imbedded in our brains as bad could now be so good for us.  Well, the difference is that of the molecular structure of each type of salt.

Table salt is made up of 97.5% sodium chloride and 2.5% chemicals such as iodine.  It is therefore void of any nutritional value and lacks the beneficial trace minerals it would possess naturally.  The horror stories are true; our bodies cannot dispose of it naturally which can lead to numerous health problems.

Sea salt is known to be a better option than table salt but it is still incomparable to Himalayan salt.  If you ingest sea salt it will dehydrate your body because it’s not at the proper molecular structure for our bodies to digest.

Because Himalayan salt has been maturing for some 250 million years under intense tectonic pressure it was able to develop in an environment free of exposure to toxins and impurities unlike that of other salts.  The trace minerals found in this salt have been shown to regulate water consumption, aid in nutrient absorption, regulate blood sugar levels and even balance cellular pH levels.

Your internal pH levels are one of the most important factors to maintaining a healthy organic balance.  Your entire body is compromised when outside of the natural range that your pH levels should maintain.  You may not even know until years down the road when your health takes a turn for the worse with such illnesses as diabetes, osteoporosis, impaired immune system and numerous others.

The good news is there are ways to keep this balanced specifically with simply adding Himalayan salt to your diet.  The 84 trace minerals found in this White Gold along with other trace elements come to life when dissolved in water.  It will help to restore your pH balance before the imbalance is able to devastate your internal organ systems.

Furthermore, Himalayan salt will replenish your body’s electrolytes which play a crucial role in the maintenance your pH levels.  Either an excess or lack of certain electrolytes will cause an imbalance resulting in the previously mentioned disorders amongst others.

Himalayan salt is the purest and most nutritional, high quality salt known to man.  It is entirely free of the toxins or pollutants that are found in both table and sea salt.  There are many health benefits to ingesting, gargling or even bathing with this salt, most of which can be reaped by any method of use.  It contains 84 trace minerals that are essential to our bodies and it is very easily absorbed and processed by our bodies thanks to these minerals.  Most importantly, it will help you to maintain a proper pH balance whether you’re over or under what you should be.  It’s as simple as drinking it, cooking with it, gargling it or even bathing in it…  So why wait until it’s recommended?  An ounce of prevention is well known to be better than a pound of cure!