Mississauga BJJ on the Map

The Brazilian jiu-jitsu classes at elite have always been my pet project, having taught grappling & jiu-jitsu classes on and off since 1999 in various academies. I have always had a vision as to what a proper academy would look and feel like, but like any business when you are working in someone else’s house its gotta be their rules so things didn’t always go according to plan.

2011 brought some serious changes as Elite grew to point we were finally able to setup in our own martial art academy . Now in our studio and able to structure the Mississauga BJJ program along the lines of what people looking to learn the art really needed, we are starting to see some solid results.

This weekend 2014 Ontario open had the Riberio Jiu-jitsu take the team title for the 3rd consecutive year in a row by a large margin. 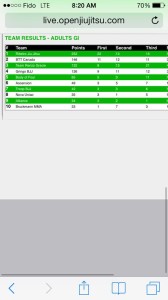 Just wait until later this year with the debut of the women competition bjj team, if recent training is any sign its safe to say they are going to make a real splash..:)

Good work to all involved next up in the July 19th five grappling event in Brampton.