BJJ / Brazilian Jiu-jitsu and grappling have never been bigger in city of Mississauga, and we are proud to be heading the pack with the top instruction, facility and overall structure to learn the art in the local area.

As part of Team Britto BJJ/ Ribiero Jiujitsu  our students have access to the very best in the art for everything from self defense to sport BJJ to Ground fighting for mixed martial arts.

In the past few months things have been really active with me ” head  BJJ instructor Claude Patrick” joining the “Darkside”  and receiving my Black belt in December.

With over 15 year experience in the art and being the very first BJJ coach in the local area plus founding local programs such at the ones at M.A.F.A and kombat arts training academy many have often told me the promotion was long overdue but I always say the same thing

“Its not about belts or fighting ability, the art of Brazilian Jiu-jitsu is a lifelong study, no matter how skilled or knowledgeable you are in BJJ there is always something more to be learned.”

Studying the art with partners and coaches like i have been blessed to  you realise the black belt is just really the FIRST step.. 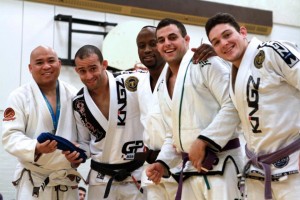 And it is always nice to see others also taking that first step,this is is why I am sending out a big congratulations to all the members of team Britto Brazilian jiu jitsu who recently received their promotions this past weekend. 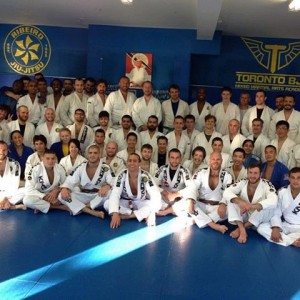 Of special note to Mississauga BJJ members is the fact our assistant instructor Alessandro the darker side of things with his recent promotion to BJJ  brown belt by professor Jorge britto.

Purple belts on the local and international scene can rest much easier now that “chi chi” has made the jump up in class. After a few years dominating the local purple belt scene and even going so far as to win ADCC qualifier and travel to ABU DHABI for the world championships I can only see bright things in his future as a brown belt.

Here is some BJJ food for thought. Size helps but BJJ works even for the smaller person when used correctly