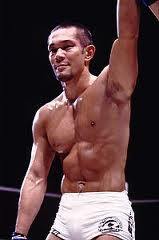 One of the biggest names in the history of Japanese MMA, Rumina Sato, is retiring from MMA, and his retirement ceremony will be held at the Shooto show on May 5th at Korakuen Hall in Tokyo.

Sato is officially walking out of the sport at age 40.

“Shooto’s Charisma” made a pro MMA debut back in November 7th 1994 against Michael McAuliffe. He went undefeated in first twelve pro fights (one draw against John Lewis) till he faced Toronto’s own Joel Gerson in 1998 where in a back and forth match he was caught in a very nice arm-lock

Even all the way here in Mississauga way before the advent of things like Youtube or other video media sharing everyone in Canadian MMA / Mixed martial arts or grappling knew who Sato was given his spectacular finishes.

Watching a Rumina Sato fight you could never take your eyes away from the action or miss a quick finish like the one above!!!  Talk about quick submission. who really starts and ends a match off via flying arm-lock!!!

Below is a insane submission highlight Sato put on our local Jiu-Jitsu contingent in 1998 at the nationals as he attended the avenge his loss to Joel Gerson & took quite a few arms and legs via submission along the way.

Back in the late 90’s to early 2000’s, with Japan’s top fighters like Noboru Asahi, Hayato “Mach” Sakurai and Enson Inoue, Rumina challenged world’s best MMA fighters such as Andre Pederneiras, Rafael Cordeiro, and Yves Edwards. These fights basically triggered Shooto’s popularity that eventually ended up in foundation of PRIDE and all the other big MMA shows in Japan.

Back then, for Japanese MMA / Shooto by far, the most popular fighter was Sato.

Sato making finishes like 6 seconds flying arm bar win over Charles Diaz and 16 seconds rear naked choke win over Edwards just left a huge impressions on the fans all over the world.

Now keep in mind this way back in the day when it was for many mixed martial artist still style vs style & BJJ was the king of the MMA Mountian. BJJ athletes had lost matches before but to my knowledge  Sato’s crazy finish of Ricardo Bothello was considered the first time a BJJ black belt had tapped in MMA competition. In hindsight not exactly true 🙂 But a killer finish and nice feather in the cap none the less. This time via Jumping heel hook!!! take note Mississauga BJJ students if you are not ready and face a creative opponent things can go bad in a hurry.

Check out this classic MMA fight below held in Shooto Japan

“I think you should watch the whole fight but if you are soley a hardcore BJJ or grappling type  and must jump straight to the point, the leg lock setup I spoke about starts at the 6 min mark”

Then, injuries started to cause a problem, and he began losing fight after fight, and, from the fight versus Masakatsu Ueda in 2011, Sato was KO’d in the first round for three straight fights.

3 ko’s at any point in a MMA or combat sports career is not a good thing so Sato has wisely made the decision to make his fight against Hideo Tokoro, that took place in VJT 1st on Christmas Eve 2012,  his last pro fight.

After the retirement, we can assume Sato to continue to be involved in MMA because, since 2005, Sato started his own MMA team / gym called Roots.

Report by Shu Hirata + a bit of my commentary added in 🙂