Tools Of The Trade: The Muay Thai Swing Kick

The basic Muay Thai swing kick, also known as a round kick, is one of the key weapons that separates Muay Thai from other styles of kickboxing. It is devastating when it lands, yet equally devastating if the striker accidentally makes contact with their opponent’s bones (knee, hip, elbow). The motion of the basic Muay Thai swing kick is most notably described as swinging a baseball bat. When executed correctly, the shin bone literally swings through the target, making it one of the most powerful techniques in Kickboxing & Muay Thai.

Many of the new practitioners of Muay Thai in our mississauga martial arts academy have a hard time developing their basic Muay Thai swing kick. There are a few reasons why this is the case:

The swing kick isn’t something that comes naturally to most people. We can all figure out rather quickly how to punch, teep, knee, and elbow, but the basic Muay Thai swing kick is something unique. Just like swinging a golf club, it’s not something we have an innate ability for. It requires practice, coaching, more practice, and most importantly, a strict observance of the fundamental mechanics associated with an efficient swing kick. 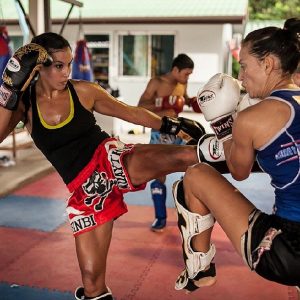 Let’s take a look at some of the basic steps we focus on at mississauga muay thai that will improve your swing kick.

4. Hip and shoulder face the target – When you’ve made contact with your target, both your rear shoulder and rear hip have now fully rotated and are lined up evenly, facing your target. This is how every kick should end. It ensures that as much power as possible is being delivered into your target.

These are a few of the basic principles that will help you develop a smooth and powerful swing kick.

Here is a video from Shane Fazen at fightTips. This is a great video describing what not to do when throwing your basic Muay Thai swing kick.

And another video from Sean Fagan the Muay Thai Guy. It’s a quick description of the kick

For those of us with tight hips and lack of mobility, here is a video that demonstrates some great stretches to improve your kicks. You can search ‘hip mobility stretches for kicks’ in Google our YouTube to discover lots of different stretches. We don’t all suffer from the same issues, so it’s important to try different stretches and see which ones will help you the most

Finally, a really smart & clear demonstration of the kick emphasizing the importance of the hip rotation and the impact the use of this fundamental tool can deliver.

You’ve now been given the fundamental principles to observe if you want to throw a really smooth and powerful swing kick. None of this comes easily, but it’s certainly worth you best efforts. Keep practicing the movement. Don’t think about power. Think about technique. The speed and power will follow when you have mastered the basics.