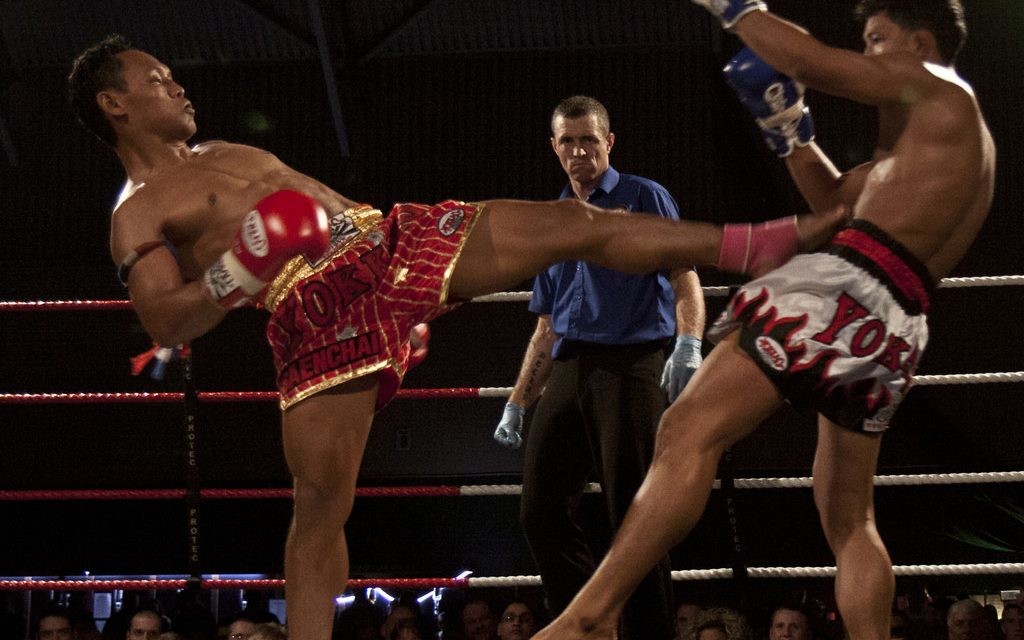 It was great to see everyone back this week in spite of weather that would keep a penguin indoors. With this kind of dedication to your goals, the year ahead looks promising.
This week the Muay Thai classes focused on the offensive lead and rear push kicks or ‘teeps’, and how to set up other techniques by faking either push kick. Let’s recap.

In order to land an effective offensive teep, the first thing you need to do is get your opponent thinking about something else. The jab is a great weapon to use. An effective jab scores a fast point, and gets your opponent to raise their guard to protect their face. Once their guard is up, you should have a clear line of sight into their midsection.

2. Make them respect the teep.

Once you’ve landed an effective teep, you can begin setting up new attacks based on how your opponent reacts to your fake teep. Here are a few examples we covered in class:
If they back up into kicking range, throw your kick. If they drop their hand in an attempt to catch the teep, you have a cross to the head. If they maintain a high and tight guard without moving, you can throw your right knee or a powerful rear leg kick. These are a few examples among many that you can use. It all depends on what you’re hoping to achieve, and what targets your opponent leaves open for you.
Here are a few videos from Chris Mauceri & Sean Fagan to demonstrate the wide range of attacks you can employ with the fake push kick.
Notice how Chris throws his teep. He gets his knee up nice and high, his hands are in the correct place, his supporting leg is perfectly straight, and he thrusts his hip forward slightly to extend the leg and add some ‘kick’ to the technique. After he has landed the teep, he returns the kick from where it came, meaning that he doesn’t just drop his leg. He retracts the lower leg, while keeping his knee nice and high to stay balanced, and in case he needs to throw a second attack.
https://www.youtube.com/watch?v=vr2URWxmPt4
Lastly, in order to sell a good teep, you have to throw a good teep. Practice your teeps on the wall or heavy bag.
You should be aiming to throw 100 teeps per leg, and 25 double teeps per leg. Record your numbers and work towards this new goal. You will notice positive results if you can continue to practice with purpose and a commitment to your goals.
“I fear not the man who has practiced 10,000 kicks once, but I fear the man who has practiced one kick 10,000 times.” – Bruce Lee
Keep practising. See you all next week.
Coach Ryan