Stop & think about the dangerous moves being made by the UFC.

Tony Ferguson out of UFC 223, Max Holloway to step in and face Khabib Nurmagomedov for lightweight title!!!

gotta be a joke.. right??? April 1st is a well known day for running pranks of people so news that the UFC 223 fight between Khabib Nurmagomedov & Tony Furguson  being cancelled got brushed aside by many people myself included, at first.

Well today is May 2nd 2018 and the news of  no retraction so it is REAL and as a mess on variety of fronts. 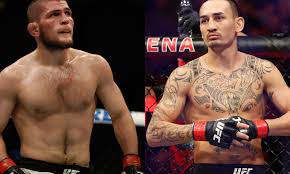 I don’t fancy myself an expert in all things but in terms of combative sports my track record speak for itself 🙂 that aside i won’t add to the pile of know it all’s and instead outline that which is unknown and likely to affect the outcome of this fight.

Max is the better and more versatile striker at a distance. a highly decorated kick-boxer who has been in and around the game + sparring partner for many of the best since his late teens he isnt ignorant to any aspect of the game but the general consensus is never having dealt with a Grappler as Verstile as Khabib ( please note i said grappler not wrestler – more on this shortly)

Why would on earth would he take the fight??
I mean honestly i know we hear it all the time and fighters generally parrot the line “ill fight anyone anytime” but that’s a very dumb and short sighted way to  approach your career. Also where the role of good management steps in to mold, direct and prepare athletes to go as far as they can in sport before running into the guy that has your number  ” make no mistake everyone has a bad matchup & father time is undefeated in combat sports”

Very rarely do you see fighters much less champion walk directly into a oncoming train-wreck of a fight like this. I just don’t get it..

Style wise its horrible as regardless of how many north american wrestlers these guys prep for they haven’t experienced enough of the grappling game of khabib to come up with answers for all the questions.
Khabib is a great fighter and Grappler extraordinaire but not a national level wrestler  especially where he hails from these guys take wrestling serious and are no joke.


He blends things in a way that works great for mma but isn’t best in class striker , Jiujitero or wrestler and thats fine because you dont have to be to dominate in MMA,which is now a sport entirely of its own.

I’ve got a good basis for how dominant he is because fate has it he fought 3 guys i’ve done a good amount of training along side of.
“Michael Johnson, Abel trujillo, Edson Barbosa”

All very talented fighters and masters of a respective element of the fight game so to see Khabib perform the way he did in those ranges says a lot .. to me anyway.

Listen guys fighters much like the general public, talk a lot of shit 🙂 You hear he wants to kill you and your cat and when you see him they want to shake hands and be friends ??So when i hear everyone calling out Khabib i just disregarded it as loose talk but to see Max step into a fight that really has no business taking place especially on short notice means he is what i like to call “a real one”

100 percent there is  easier money out there.

This leads to the next unknown that dictates almost everything in the fight game, Money….

You had better believe they are paying Holloway Mega bucks  to take this fight on short notice while going up a weight class against a guy on paper he should get smoked by. its Definitely going to be in excess of 10 million so congrats to Max on picking up the cheque but  this fight comes with a cost and not just to him…

Every fight has a cost, physically, emotionally, mentally and people out side of the fight game often fail to be forward thinking and rationalise why a smart fighter and management may do certain things, so let me break out the crystal ball and explain why this is a TERRIBLE FIGHT

I love the fight it self as a viewer but on and organisational level does this is crazy. How can the brains behind the machine not stop to realize that this fight makes 3 guys with a claim to the light weight champions in the UFC??

How does a belt have 3 holders?? 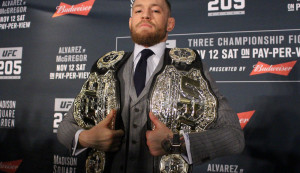 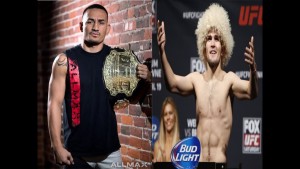 How does a belt with any legitimacy have three holders?? I mean it is the fight game so legitimacy is always going to be a issue with the politics of the fight game BUT this time so boldly disregarding the standings is a dangerous step away from the realm of sport and towards entertainment which is fine if that what we acknowledge it is.