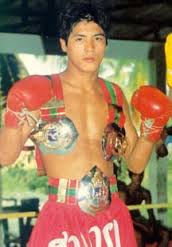 Is His Muay Thai Authentic???

Its really common I hear people describing their particular style of fighting style as Authentic Muay thai. It kind of perplexes me since it generally means moving, reacting and thinking in a specific way at fight time.

Now don’t get me wrong even the most bread and butter thai-boxing champion has a wealth of knowledge and some killer attributes or they wouldn’t be a champion.

But why do so many confine their skill development and ring tactics to look like the rest of the field? There are champions past and present with great all round skills ranging from the usual to some very rare foot work, head movement and even world class boxing ability.

I’ve never understood the reasons thai boxers didn’t make use of good boxing training when available to them as a cross training tool.

With the rise of popularity in  event s like K1 and UFC many newer fans drop names like  Anderson Silva or Ernesto Hoost when they talk all time Muay Thai greats . In reality while both are great fighters and athletes neither went far in the world stage of muay thai..

When looking at all time bests, new school students can learn a lot from I am always brought back to the same few names..

top of my list…  the man known as Samart

Just like choosing a fine wine, favorite tv show or any other martial art there is always going to be some debate as to what is best.That being the case i don’t expect everyone to agree with me on my pick for my most skilled and favorite nak muay of all time. but we can for sure all agree that he brought a new look to what worked and why in the art of muay thai.

A legendary Muay Thai fighter turned boxer, turned musician, turned movie star!!! This guy has literally done it all but to most of us he is best know for his exploits in the ring

All this plus he was recognized as fighter of the year from by  Thai national sports writters association  in 1981,1983 & 1988 respectively

What i like best about Samart “aside from his ring generalship and outstanding defensive tactics” is he showed time and again even being a pure nak muay you are not forced int a mould.

Generally if you ask people Thai-boxers are looked at as having great clinch work kicks and knees but rather lacking in the footwork, head movement and punching department respectively. The general excuse for this is “under full muay thai rules most of that wont work”. Samart while a Very special athlete and not someone who everyone can expect to duplicate ability wise still showed that operating outside of the Generally accepted mold and building a full skill set can pay big rewards.

competing even under full rules with knees clinch and elbows as he did,doesn’t mean you are doomed to to having loose punching technique and slow plodding footwork & limited head movement.

And another Solid highlight of the man in action